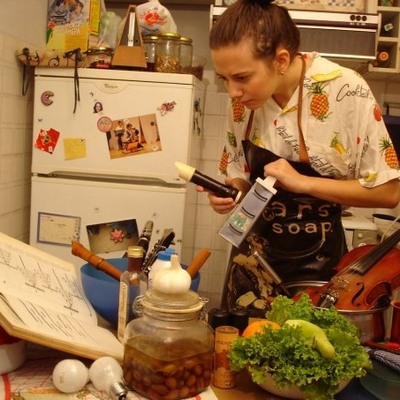 Danai Bletsa was born in Thessaloniki, Greece in 1988. She started her musical studies with piano and classical singing. In 2005 she was admitted with scholarship and 1st prize at the Department of Music Science and Art of University of Macedonia, in Thessaloniki, Greece, where she studied composition with Giorgos Kyriakakis. In 2008 she moved to Amsterdam to follow the bachelor composition degree at the Conservatorium van Amsterdam, where she still studies with Wim Henderickx and Richard Ayres.

She studied orchestration with Theo Verbey, had composition lessons with Tristan Murail, Misato Mochizuki, Stefano Gervasoni and Fabio Nieder, and attended masterclasses with Brian Ferneyhough. She studied classical singing at the New Conservatory of Thessaloniki with Sophia Kyanidou and currenty privately in Amsterdam with Sabine Wüthrich.

Having participated in several opera productions as a member of the Opera Choir of Thessaloniki, she worked as producer and composer of multidisciplinary pieces at the 1st Biennale of Contemporary Art of Thessaloniki in 2007, collaborated with Neuköllner Oper and Yo-opera Festival resulting in a short opera performance at the Utrechtse Stadsschouwburg in 2009 and she finally formed and produced her own music theater piece "One legatura to be plucked (... for your lovers, the pillars of salt)" at the Conservatorium van Amsterdam.

She is a member of Oiseaux Bizarres, an ensemble that consists of 13 musicians-performers experimenting with the borders between music and theater (Sonorities Festival 2012, Belfast). She was an active member of the Atlas Academy multi-cultural research (2010 and 2011).

One legatura to be plucked (...for your lovers, the pillars of salt)

One legatura to be plucked
(...for your lovers, the pillars of salt)
composed by Danai Bletsa

A theater performance for two women, one man, baroque ensemble and contemporary ensemble.

One legatura to be plucked

"One legatura to be plucked" is a unique amalgam-story, whose heroes tend to live between dreams and drops of water, full-moons with salted edges and pillars of salt. All this, while maintaining their desire for French wine and camembert cheese, velvet and IKEA-centered bliss.

Carosello (2011-2012) was created during the Nieuw Ensemble Componistenpracticum “Alles kan! – kan alles?”, the last six months. This time period I became very interested on how the mechanisms of old machines worked and also on kinetic art creations, so I went on discovering those artists’ ways to start or provoke one motion and to maintain it in various manners and speeds, creating a sustained result. “Carosello” is the result of this fascination of mine and the interaction with the colorful Nieuw Ensemble, with the plucked sound in its core.