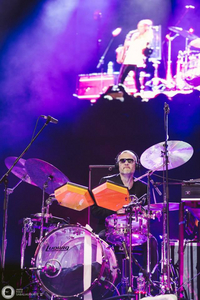 Ruben van Roon (1971) started at the School for Young Talent at the Royal Conservatoire in The Hague in 1987 and graduated as performing jazz drummer in 1995. In 1992, he started his own formation The Jazzmeteors with whom he released 2 albums: Ugly Beauty and Kikke. In this formation, he collaborated with a.o: Wiboud Burkens, Manuel Hugas and Bob Fosko. The album Kikke (1998) was well received by music magazine Oor and Musicmaker. It was also chosen as Jazz Album of the Year by newspaper AD. In 2000, The Jazzmeteors toured with famous jazz saxophonist Dave Liebman. There was also a unique concert with Roy Hargrove in the Melkweg. Van Roon became drummer of the new Thijs van Leer formation, Conxi, in 1993. And in 2001, he and van Leer started a new version of the legendary band Focus together with Bobby Jacobs and Menno Gootjes.

In 1998, he was asked as live drummer in the big beat projekt of Hans Weekhout, Capricorn. This introduced him to EDM for the first time. Capricorn played concerts in New York and London, among other places. From 1998, he made productions under the name DJ Kikke. As DJ Kikke, he then started performing a lot with a hybrid set-up in which he combined the role of DJ and drummer using an Akai MPC 2000. This was soon followed by a collaboration with Hans Dulfer, with whom he toured intensively for 10 years, both nationally and internationally, culminating in a major tour through Japan in 2000.

After this intensive period, van Roon was asked as drummer for the live band of the well-known Leiden DJ collective, Kraak & Smaak. With this formation, besides many club tours in the Netherlands, he played at Eurosonic, Sziget Festival, Exit Festival Novisad and other major festivals in Europe, among others.

He also started a Rock project with fellow CvA teachers Bram Bol and Jolien Grunberg in 2009. This project was named Miss Pussy from which an EP was released. This EP can be found on iTunes and Spotify.

In 2012, he was asked to be a drummer in the Candy Dulfer band. In this, not only was he a drummer but also DJ again. In this band, besides his acoustic drumset, he used the Linn drum machine, Simmons drums and Ableton. With this successful formation, van Roon played on many renowned stages in Europe. Van Roon was a guest DJ/Simmons drummer at the first Ladies of Soul concert at the Ziggo Dome 2014.

In 2014 there was a collaboration between van Roon and The Hague underground sensation, the Crows. With this hiphop collective, he produced and composed the album, Rok and Roll Safari with the single; Alles Wat Je Ziet. He also played drums in the live band at venues including Parkpop, Zwarte Cross and the Rok and Rol Safari club tour.

In 2019, van Roon started his own successful drum education channel on YouTube; RubenvanRoonDrumChannel