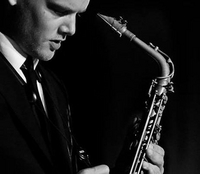 Maarten Hogenhuis (1986) is an Amsterdam-based saxophonist. He is a member of the exhilarating powerjazzgroup BRUUT!, The More Socially Relevant Jazz Music Ensemble (led by Reinier Baas), the two-drummer band Krupa & The Genes and leads his own quartet and trio.
Besides those bands, he is a sought-after sideman, which resulted in the collaboration with artists such as Pete Philly & Perquisite, The Four Tops, The Temptations, New Cool Collective Bigband, Caro Emerald, Ben van Gelder, Benjamin Herman, Jesse van Ruller, Joris Roelofs, Anton Goudsmit and many others.

In 2012 he reached the final of the Dutch Jazz Competition with his Maarten Hogenhuis Quartet, where he was granted the prize for Best Soloist. In that same year, BRUUT! was nominated twice for a Radio 6 Soul & Jazz Award in the categories Best Live Act and Best Talent and they were invited to play at the North Sea Jazz Festival (Holland), Tokyo Jazz Festival (Japan), Standard Bank National Jazz Festival Grahamstown (South Africa), Jazz a Ouaga (Burkina Faso) and Bielska Zadymka Jazzowa (Poland).

In 2013 Maarten won the prestigious Keep an Eye International Jazz Award with his Maarten Hogenhuis Trio (Best Soloist and Best Band) and in 2014, he was granted the Laren Singer Jazz Award. In June 2014, he released his debut album ‘4/3’, which was very well-received by the press.