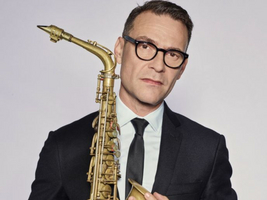 Benjamin Herman got his first saxophone at the age of twelve. At thirteen he was already playing on the professional club circuit. By the time he was twenty years old he was appearing with different groups around the world and initiating projects of his own. His fame spread beyond jazz circles in the 1990s when he formed the groundbreaking ensemble New Cool Collective.

Having made a name as soloist while still a teenager, Benjamin Herman has appeared on over a hundred records with all kinds of artists, from Candy Dulfer to Misha Mengelberg. Herman has also built a career in The Netherlands and abroad as a composer, with New Cool Collective as well as with his smaller bands. He is a well respected craftsman whose playing is firmly rooted in jazz tradition. His gigs are strongly influenced by dance floor jazz, surf and punk music, free jazz and traditional music from all over the world, attracting adventurous music fans of all genres as well as straight ahead jazz aficionados.

Today Benjamin Herman is one of the most original and productive jazz musicians in the Netherlands exploring influences beyond the confines of the jazz world. After starting his own record label Roach Records in 2004 Benjamin Herman produced a string of CDs and vinyls. He recorded and toured with amongst others Paul Weller, Dr. John, Tony Allen, Stan Tracey, Misha Mengelberg, Han Bennink, and Peter Maffay, programmed several festivals, played all over the globe and worked on numerous personal projects. Amongst many awards and prizes are the prestigious VPRO/Boy Edgar Award and ‘Best Dressed Man’ by Esquire magazine.