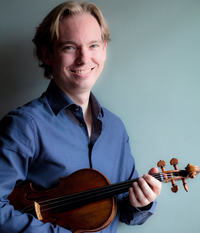 Tjeerd Top (1978) studied with Qui van Woerdekom and Jaring Walta at the Royal Conservatoire of The Hague and with Alexander Kerr at the Conservatorium van Amsterdam. He won first prize at the prestigious Oskar Back Competition in 2001, winning the ‘Kersjes van de Groenekan Fonds’ prize for his performance of a composition by Carlos Micháns at the same time.

Additionally he is active as a chamber musician; he performs regularly with the Vermeer Trio and for a number of years he formed a duo with harpist Lavinia Meijer, with whom he won the Fortis Mees/Pierson Award. He also gave concerts with Leonidos Kavakos, Emanuel Ax, Pierre-Laurent Aimard, Thomas Adès and many others.