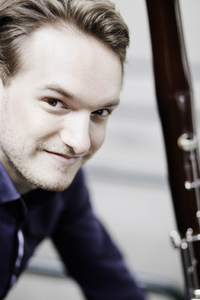 Simon Van Holen (Belgium) is solo-contrabassoon of the Royal Concertgebouw Orchestra. He has performed with the Berlin Philharmonic Orchestra, the Luzern Festival Orchestra, the Bavarian Radio Symphony Orchestra, the Tonhalle Orchester Zurich, and the Deutsche Kammerphilharmonie Bremen, and is regularly invited as both a soloist and a teacher in Europe and Asia.

In 2003, Simon Van Holen entered The Royal Conservatoire of The Hague and went on to complete his studies with Gustavo Núñez at the Robert Schumann Musikhochschule in Düsseldorf, graduating with the highest distinction in 2010. Furthermore, he took masterclasses with Brian Pollard, Klaus Thunemann, Dag Jensen, Stefan Schweigert, Sergio Azzolini, and Marion Reinhard.

Van Holen’s career as a professional orchestral musician began even before he had completed his musical studies. He was a member of the European Union Youth Orchestra and the Gustav Mahler Jugend Orchester, and has been invited to play in the Rotterdam Philharmonic Orchestra, the Malaysian Philharmonic Orchestra, the Orchestra de l’Opera de Rouen, and the Norrköpings Symfoniorkester. In 2007 he won the Academy Position with the Düsseldorfer Symphoniker, in which he was appointed solo-contrabassoonist in 2011.

Having been an active chamber musician from a young age, Van Holen became the recipient of the prestigious ‘Villa-Musica Rheinland-Pfalz’ Scholarship. Also, he took part in the Zermatt Festival Academy and the Gustav Mahler Academy, and performed with some of the most legendary musicians such as Menahem Pressler, Ingo Goritzki, Jean-Yves Thibaudet, Jürgen Kussmaul, and Wolfgang Boettcher.

In 2013 Simon Van Holen was awarded the prize ‘Prix de Salon’ by the business circle of the Royal Concertgebouw Orchestra for his extraordinary musicianship. The award made it possible to commission a new work for contrabassoon and string quintet by Dutch composer Kees Olthuis, and to record Simon Van Holen’s debut album Pro Contra!, which has been released on Challenge Records and was well received by national and international press and radio stations.

Simon Van Holen teaches bassoon and contrabassoon as a principal subject at the Conservatorium van Amsterdam and regularly gives masterclasses around the globe.