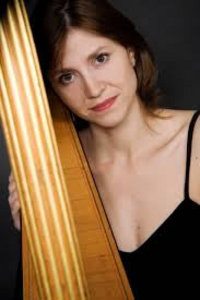 Sandrine Chatron was awarded first prize for harp and chamber music at the Paris Conservatoire in 1995. She studied with Gérard Devos, Marie Claire Jamet, Frederiqe Cambreling and Germaine Lorenzini, winning first prize at the Cité des Arts Competition, at the Chamber Music Competition in Arles and the Banque Populaire Foundation award. She joined the Netherlands Philharmonic Orchestra as a solo harpist in 2009. She has been a teacher at the Conservatorium van Amsterdam since 2012, and at the Haute Ecole de Musique de Genève since 2018.

Sandrine is a member of the Ensemble Calliopée as well as the Trio Polycordes. She has appeared both as a concert artist and as a chamber musician across Europe, Asia and North America, including appearances at the Théâtre des Champs-Elysées and the Amsterdam Concertgebouw. She performs regularly with the Ensemble Intercontemporain, with whom she has recorded Pierre Boulez's Sur Incises for Deutsche Grammophon. She has worked with the principal French orchestras such as Opéra de Paris, Orchestre de Paris, Orchestre National de France and played one season at the Orchestre du Capitole de Toulouse. She has also performed with the Klangforum Wien, the Mahler Chamber Orchestra, the Berliner Philharmoniker, the Royal Concertgebouw Orchestra and the Lucerne Festival Orchestra, working with such conductors as Claudio Abbado, Riccardo Muti, Daniel Harding, Sir Simon Rattle, Yannick Nézet-Séguin and Georges Prêtre.

Solo recordings include a recital disc of British music for Aparte, French Music (Caplet, Debussy) for Ambroisie, Le salon de musique de Marie-Antoinette for Naïve, and the premiere recordings of concerti for harp by Kristof Maratka, and Ricardo Nillni.