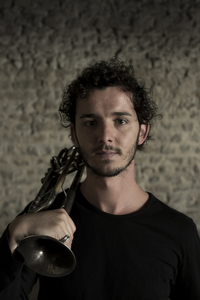 Since August 2013 he has been principal trumpet with the Royal Concertgebouw Orchestra in Amsterdam. Additionally he had a number of prestigious engagements with the Mozart Orchestra, the Mahler Chamber Orchestra and the Musicians for Human Rights Association.
Omar is also very active as a solo, duo and chamber musician being a founding member of the famous Italian Wonderbrass Quintet.