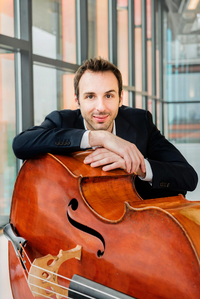 The Frenchman Olivier Thiery is an internationally renowned double bassist. He started his career in 2008 in the Royal Concertgebrouw Orchestra, and in 2012 he joined the Camerata RCO.

During his studies at the Folkwang Hochschule of Essen, Germany, Olivier devoted himself to the solo and chamber musci repertoire. As a result, he won third prize at the international ARD competition in 2009 and subsequently gave many concerts as a soloist and chamber music player at estivals including the West Cork Chamber Music Festival, the  Schiermonnikoog International Chamber Music Festival, Musique à l'Emperi in Salon de Provence, together with artists including Alexei Ogrintchouk, Emmanuel Pahud, Eric Le Sage, Daishin Kashimoto, and Anthony Marwood. In 2013 Olivier recorded his first CD, Illuminated Bass, featuring works by Schubert, Schumann, Hindemith en Bottesini, for Challenge Records International.

Since 2014, Olivier Thiery has been a teacher of double bass as a principal subject at the Conservatorium van Amsterdam. He plays a C. Candi double bass (ca. 1920), on loan to him by the National Instrument Foundation.