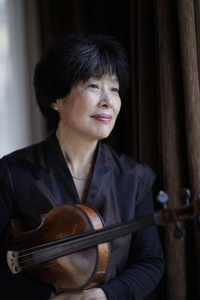 Her discography includes more than thirty releases on labels such as BIS, Chandos, DG, EMI, Hyperion, and Philips. She has been a recipient of numerous awards including the Avon Arts Award (1993), Japan's Suntory Music Award (1995), and Mainichi Award of Arts (1996). Toru Takemitsu composed the viola concerto A String around Autumn for her in 1989.

She has played a 1690 Andrea Guarneri instrument since 1988.