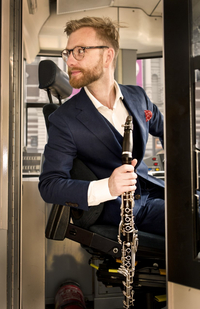 Bart de Kater (1986) studied with Herman Braune, Harmen de Boer and Arno Piters at the Conservatorium van Amsterdam obtaining both his bachelor’s and master’s diploma with honours. During his studies he founded the Nieuw Amsterdams Klarinet Kwartet, with which he performed at  venues including the Muziekgebouw aan ’t IJ and the Concertgebouw Amsterdam and toured in Bulgaria, Portugal and Brazil. Additionally, he is a member of the Netherlands Wind Ensemble, with which he toured Jordan, Israel,Turkey, Poland and China. He regularly plays with the Radio Philharmonic Orchestra, the Netherlands Philharmonic Orchestra, the Residentie Orkest of The Hague, Ensemble LUDWIG and the Royal Concertgebouw Orchestra. He also collaborated on the Calefax Rietkwintet’s jubilee album CalefaXL and he is part of the new musical venture Splendor Amsterdam.

His interest in music theatre led to collaborations with theatre companies such as Speeltheater Holland, the Toneelmakerij, Ulrike Quade Company and the Netherlands Opera. He also likes to explore folk music, playing the kaval and the gaida, a Bulgarian traditional shepherd’s flute and bagpipes.

Bart plays a Schwenk und Seggelke clarinet and basset horn which he was able to purchase with the support of the Nationaal Muziekinstrumentenfonds, Stichting Eigen Muziekinstrument and the Prins Bernhard Cultuurfonds.