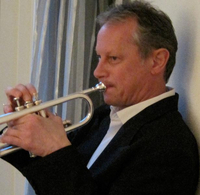 Ad Welleman studied trumpet at the Royal Conservatory of The Hague with John Taber and Peter Masseurs.
Twice he won a scholarship from the Ministry of Culture to study abroad. He studied with Armando Ghitalla, Roger Voisin, Phil Smith and William Vacchiano in the United States and with John Taber in New Zealand.

Ad Welleman is principal trumpet of the Netherlands Philharmonic Orchestra in Amsterdam and he is a teacher of trumpet at the Conservatorium van Amsterdam.

He freelances with Dutch symphony orchestras like the Royal Concertgebouw Orchestra, as well as in several Dutch modern music ensembles. He is frequently asked to play in the brass ensembles of the Netherlands Philharmonic Orchestra and the RCO Brass.
He also appears as a soloist and is invited regularly for masterclasses.