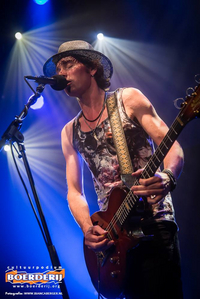 Marcel Singor (Terschelling, 1972) is a guitarist, singer, songwriter, and producer. He picked up a guitar for the first time at the age of nine and won national guitar awards four years later. His reputation as a very young virtuoso guitar player grew quickly, as did the number of bands in wich his talents were displayed. Marcel's growing interest in singing, songwriting and recording resulted in the forming and fronting of the band Xam, which released an eponymous album in 1997. Different kinds of session work followed and Xam became Maxville, which released a critically acclaimed CD in 2002.

Subsequently he did a lot of session work, and in 2015 and 2020 he released two twee solo albums which were both produced by Bas Bron. In 2017 he joined the band Kayak as guitarist, recording three albums, the third of wich is due to be released in May 2021. In 2019 he was led guitarist in Ayreon's Into the Electric Castle live shows, resulting in the release of a double live album/blu-ray in 2020. There is also a postponed tour with prog legende Fish lying ahead.