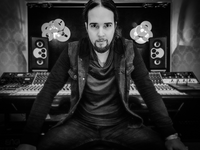 Joost van den Broek (1982) did a master's degree in classical piano and arrangements after studying 'music production & keyboards'. He produces for international metal, and rock bands such as Epica, Powerwolf, Blind Guardian, Revamp, Blackbriar and has the studio Sandlane Recording Facilities as a home base. With a progressive rock/metal background as a keyboardist, he has played with After Forever, Star One, Demons & Wizards and is bandleader, lead producer of the Ayreon live events. He also has a role as arranger and musical director for major national events such as: 4/5 mei concerten, de koningsvaart en 75 jaar Verenigde Naties.