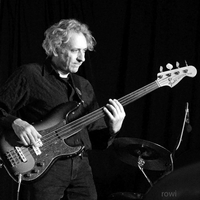 David de Marez Oyens studied bass guitar and double bass at the Hilversum Conservatory and took arranging lessons with Jerry van Rooijen, Rik Elings and Kenny Napper. Since 1985, he has been teaching at the Conservatorium van Amsterdam. He has given clinics and seminars on jazz, pop, latin, rock, fusion and Indian rhythms in the Netherlands, Belgium, Germany, Norway, France, Danmark, Greece, and the School of Music from the University of Miami. Tours have included Spain, France, former Yugoslavia, Russia, Estonia, Japan, The Gambia, Curaçao, USA, Canada and South Africa.

Since 1987, David has been teaching and playing at the summer courses organised by ‘the Jazz-Studio’ in Belgium. He can be heard on numerous CDs, radio and TV productions. Currently he tours with Jan Akkerman, C_urb, The New Conrad Miller Trio and Alter Ego.