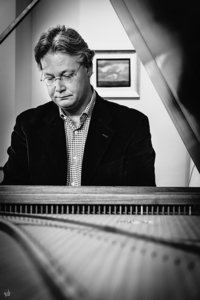 Johan Hofmann performed with many outstanding musicians in most European countries as well as in the United States. His ensemble Le Nouveau Concert, with Judith van Wanroij, Bert Honig and numerous guest-players, performed at The Flemish Opera, the Network Early Music, the Grachtenfestival Amsterdam and the Peter de Grote Festival, amongst other things. As a soloist, he performed at various events, including  the Festival of Early Music Utrecht. In 2009, he released his first solo CD, ‘Il Ballo Della Vita Humana’, to much critical acclaim. Since 2012, he has been giving lecture-recitals in which te presents the findings of his research into the so-called transposition harpsichord by Ruckers.

At the Conservatorium van Amsterdam he teaches harpsichord and thorough-bass as subsidiary subjects as well as chamber music, improvisation and the course ‘Harmony in Performance Practice’. At the Prince Claus Conservatory in Groningen he teaches harpsichord and thorough-bass as principal subjects, chamber music and historical performance practice.

In addition to being a guest-teacher at numerous other conservatories like Arnhem, Den Haag, Enschede, Tilburg and Zwolle, he gives masterclasses in countries including Italy (Castelfranco and Udine), Lithuania (Vilnius) and Germany (Bavaria)