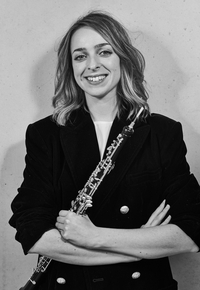 Born in Cartagena, Spain in 1987, Miriam Pastor Burgos studied oboe with José Francisco Valero at the Murcia Conservatory from 2003 to 2007. She went on to study with Dominik Wollenweber at the Hanns Eisler Hochschule für Musik in Berlin in 2007. In 2008 she was accepted at the Karajan Academy, the orchestra academy of the Berliner Philharmoniker. She was member of the European Union Youth Orchestra, Gustav Mahler Jugend Orchester and Spanish National Youth Orchestra.

From 2010-2011 Miriam was solo English hornist with the Konzerthausorchester Berlin, from 2011-2012 solo oboist with the Komische Oper Berlin, and from 2009-2014 she played with the Mozart Orchestra of Bologna under Claudio Abbado. As a guest she played with the Berliner Philharmoniker, the Bamberger Symphoniker, the Deutsches Symphonie Orchester Berlin, the NDR Sinfonieorchester Hannover and the Hessischer Rundfunk Sinfonieorchester Frankfurt. In September 2012, Miriam was appointed solo English horn with the Royal Concertgebouw Orchestra.