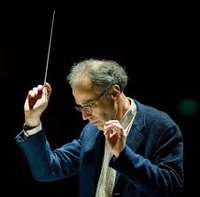 Ed Spanjaard (Haarlem, 1948) studied piano and conducting in Amsterdam and London. From 1973, he worked as an assistant conductor at the Royal Opera House Covent Garden (under Sir Colin Davis, among others), the Glyndebourne Festival Opera, the Royal Concertgebouw Orchestra (under Bernard Haitink), as well as with Leonard Bernstein and Herbert von Karajan. For several years he also assisted at Bayreuth, where he was involved in the preparations for the 1983 production of Wagner’s Der Ring des Nibelungen, conducted by Georg Solti.

In 2001, Ed Spanjaard made his official debut at the Royal Concertgebouw Orchestra. This successful collaboration has since led to frequent return engagements. He has also appeared as guest conductor with many leading orchestras, such as the Münchner Philharmoniker, Staatskapelle Weimar, Danish National Symphony Orchestra, Ensemble InterContemporain (Paris), Ensemble Modern (Frankfurt), KlangForum Wien, Dutch Bach Society, Dallas Symphony Orchestra, and the Orchestra of the 18th Century (Così fan tutte). Until 2013, Ed Spanjaard was principal conductor and artistic advisor of the Limburg Symphony Orchestra, which has merged into the Philharmonie Zuidnederland. Ed Spanjaard currently holds the position of principal conductor

With the Nieuw Ensemble, where Ed Spanjaard holds the position of principal conductor, he has conducted countless premieres, including the chamber operas Wolvendorp and Night Banquet by Guo Wenjing, a new production of Der Kaiser von Atlantis by Viktor Ullmann, Een ziel van hout by Robert Heppener (Holland Festival 1998) and Alfred Alfred by Franco Donatoni. The Nieuw Ensemble and Joël Bons together established the Atlas Ensemble, comprised of musicians from all corners of the globe. In 2002 the Atlas Ensemble performed the world premieres of Seyir by Theo Loevendie and The waters flow their way by Fabio Nieder in Berlin.

In September 2007, Ed Spanjaard performed Mahler’s First Symphony and Bruckner’s Ninth with the Limburg Symphony Orchestra. In November/December 2007 the orchestra accompanied Puccini’s triptych Il Trittico (Il Tabarro, Suor Angelica and Gianni Schicchi) with Opera Zuid. Early 2008 he conducted the world premiere of Snow White by Micha Hamel at the Nationale Reisopera. In November 2008, the new theater in Enschede was inaugurated with the première of the opera Hotel de Peking by Willem Jeths.

From 2009 onwards, the Nationale Reisopera has programmed the complete Ring, conducted by Ed Spanjaard, which was completed in 2012 with Götterdammerung. All four productions (Rheingold 2009, Die Walküre 2010, Siegfried 2011) were received very well.

He currently holds the position of principal conductor of the Nieuw Ensemble and teaches at the Conservatorium van Amsterdam.