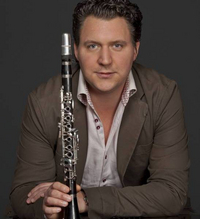 Arno Piters (1980) studied clarinet and E-flat clarinet with Jan Cober and Willem van der Vuurst at the Maastricht Conservatory, graduating with distinction. He continued his studies with George Pieterson at the Conservatorium van Amsterdam and again graduated with distinction.

Arno Piters was a member of the National Youth Orchestra of the Netherlands, the Gustav Mahler Jugendorchester, and the European Union Youth Orchestra, where he performed under conductors such as Pierre Boulez, Bernard Haitink and Vladimir Ashkenazy. He has made solo appearances with the Residentie Orchestra and the Nuremberg Symphony Orchestra, among others. As a chamber player, he has performed at festivals both at home and abroad.

Arno Piters was a member of the Netherlands Radio Symphony Orchestra from 2001 to 2003. Subsequently, he was appointed clarinettist and E-flat clarinettist with the Royal Concertgebouw Orchestra in Amsterdam.