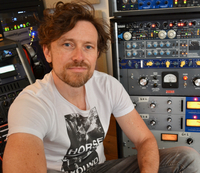 Besides being staff member and one of AEMA's founding fathers, Hans Weekhout teaches Mix & Production. Hans is one of the best-known names in the Dutch studio scene. He has collaborated with international artists such as Prince, Falco and Girls Aloud. He has released his own work under the moniker of Sqvid, Tsunami and Yukon, and released with major labels such as R&S Records, NovaMute, Arcade America and PIAS. As Capricorn he scored a worldwide no. 1 hit with the now iconic track 20Hz.