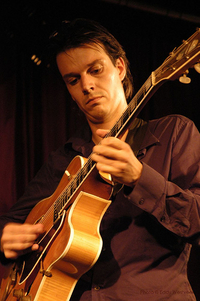 Jesse van Ruller started to play the guitar at the age of seven. In 1990 he became a student with Wim Overgaauw at the Hilversum Conservatory and completed his studies there, with the highest possible scores, in 1995. In the same year he won the Thelonious Monk International Jazz Guitar Competition, being the first European to be awarded with this prestigious prize. The jury included John Scofield, Pat Metheny, Jim Hall and Pat Martino.

He recorded two CDs under his name and plays with his own trio and quartet (with Karel Boehlee, Frans van Geest and Martijn Vink). He can also be heard in lots of other bands including The Jazz Orchestra of the Concertgebouw, Michiel Borstlap Group, The Piet Noordijk Quintet and in duo with guitarist Maarten van der Grinten.

Jesse shared the stage/studio with musicians including Tom Harrell, George Duke, Christian McBride, Mike Stern, Kenny Washington, SfeQ, Benjamin Herman, Larry Goldings and Idris Muhammed. Along with Peter Erskine he was soloist in 'Blood on The Floor' by the British composer Mark Anthony Turnage with the Asko Ensemble and with the City of Birmingham Symphony Orchestra conducted by Sir Simon Rattle.

The three CD's Jesse made as a leader are released by Universal in Japan and are very succesful there. His third CD 'Catch!' features Roy Hargrove on three pieces.It is nominated for the Edison Award (the Dutch equivalent to the Grammy Award) in the category Jazz.Jesse is also nominated for the 2001 Bird Award in the category Talent deserving wider recognition.
Van Ruller teaches at the Conservatorium van Amsterdam.

Jim Hall said about Jesse: 'A most expressive player; he really touched me on a personal level.'