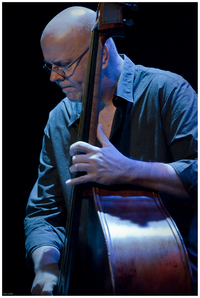 Bassist/composer Jay Anderson is among the most versatile and respected jazz artists performing today. Born in 1955 in Southern California, Anderson began playing acoustic bass at the age of 12. Throughout junior high, high school, and college, Anderson won numerous awards for excellence in both jazz and classical music. One week after receiving a Bachelor’s Degree in Performance from California State University at Long Beach, Anderson was asked to join the Woody Herman Orchestra. After touring with the 'Herd' for a year, he was called by Carmen McRae and performed with the legendary singer for the next two years.

In 1982 Anderson made the decision to move to New York City. Since moving East, he has continued to perform and record with some of the most important names in jazz. Anderson has been a regular member in the bands of Red Rodney & Ira Sullivan, Michael Brecker, Toots Thielemans, Maria Schneider, Bob Mintzer, Michael Franks, Eliane Elias, Bennie Wallace, Lew Tabackin, Steve Khan, Lynne Arriale, and was with Joe Sample from 1992 to 2006.

Anderson has also done numerous jingles and non-jazz recordings with Frank Zappa, Tom Waits, Chaka Khan, Michel Legrand, legendary poet Allen Ginsberg, and the Grammy Award winning 1997 Record of the Year Falling Into You by Celine Dion. He has been a guest performer with the Atlanta Symphony conducted by Robert Spano and the Australian Chamber Orchestra featuring soprano Dawn Upshaw.

In addition to being a highly sought-after sideman, Anderson is a proven voice in his own right. His two original recordings on the DMP label, Next Exit and Local Color have received critical acclaim both in the U.S. and abroad.

Anderson has been the recipient of the NEA grant for composition and two Meet the Composer grants. Twelve of the recordings he has been featured on have been nominated for the Grammy Award. He has conducted clinics around the world and is a Professor of Jazz Bass Studies at the Manhattan School of Music in New York City.