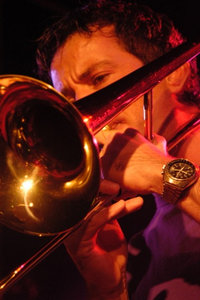 Bert was introduced to the trombone when he was sixteen. He turned out to be a special talent in brass playing and after studying at the conservatories of Utrecht an Hilversum (now Amsterdam), he became a member of the famous Dutch Swing College band when he was 22. He traveled the world over with this band and recorded 13 CDs. Because of his deep passion for music he grew as a musician and this led to him being invited as soloist for many international festivals, partially because he was sent by the NOS to represent Holland on festivals that were famous all over the world.

Bert became who he is because of jazz music. He gained fame within the national and international jazz world. He won various prestigious awards: The Export Award, The Bird Award (both with DSC), the Peter Schilperoort Award and the Kobe-Jazz Street Award in Japan. He played with many famous artists, such as Chick Corea, Clark Terry, Scott Hamilton, Denise Jannah and Toots Thielemans. He also teaches at the Conservatorium van Amsterdam.