A study of the repertoire, its musicians, and its audience
The musicologist Tim Carter observed that in the seventeenth century, ‘the composer’s task is not so much to create meaning as to determine a space in which meaning might be created, by the performer on the one hand, and for that matter, by the listener on the other…’

In this research project, I am examining this ‘space’ in the vocal oeuvre of Dieterich Buxtehude. There are 122 vocal works surviving from the Lübeck organist and composer, scored for various combinations of voices and instruments in styles ranging from stile antico counterpoint to the Italianate concerto. Despite current conceptions of Buxtehude as a prominent figure in the seventeenth-century musical world, and the growing popularity of his vocal music in period instrument performances, his substantial vocal oeuvre has received relatively little attention in modern scholarly discourse.

In most cases, much of what makes a seventeenth-century musical work expressive is not notated in the score. Elements such as the basso continuo parts, or improvised embellishment by singers and instrumentalists were not just ornamental additions to a fixed score; they had (and still have) a crucial role in determining the effect of the piece as it is being performed. Therefore, when analysing repertoire by Buxtehude and his Northern European contemporaries, one must give serious consideration to the performing practices of period.

However, performance practice is only one aspect of a full ‘re-imagination’ of this body of work, as it was performed and heard in late seventeenth-century Lutheran Europe. As a performer, I have had the opportunity to engage with repertoire by Buxtehude and his contemporaries in modern performance settings. From these experiences, my motivation to undertake this research has been driven not by concerns about performance practice, but by questions of meaning. For example, how did contemporary Lutheran theology influence the creation and performance of musical settings of sacred texts? And in what ways did the prominent themes of personal devotion and meditation affect the seventeenth-century listener’s experience of listening to the performance of a concerted vocal work?

These questions are not only important for discovering more about Buxtehude’s world – they are also critical for present-day approaches to the repertoire in both performance and academic inquiry. An awareness of the associations between textual content and elements such as musical style, instrumentation, and thematic material is paramount to an informed approach to the repertoire. My research is focussed on highlighting these associations, so that they may be applied to present-day approaches to this varied and vibrant body of work. 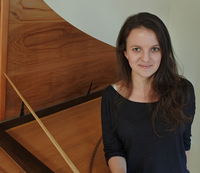 Originally a pianist and cellist, Jenny accidentally discovered the fortepiano at the age of 17, soon followed by the harpsichord and organ. In 2009, Jenny became the first student to complete a Bachelor of Music in Early Keyboards at the University of Auckland, New Zealand, graduating with First Class Honours
In September 2009, Jenny moved to Amsterdam with the assistance of the Dutch Huygens scholarship. At the Conservatorium van Amsterdam, Jenny continued her early keyboard studies with Menno van Delft, Therese de Goede, Jacques van Oortmerssen, and Richard Egarr. In 2012, Jenny began specialized postgraduate study in basso continuo, completing her Master’s degree under the guidance of Therese de Goede at the Conservatorium van Amsterdam in 2014.

As a musicologist, Jenny gained her Master of Music from the University of Auckland with First Class Honours in 2015, with a thesis on text and music in seventeenth-century sacred vocal repertories. She received the Prize for Best Student Presentation at the 2014 STIMU symposium in Utrecht. Jenny has tutored and co-developed course content for several Bachelor-level courses in harmony and counterpoint and performance practice at the University of Auckland.

Jenny performs regularly with various period instrument ensembles in the Netherlands, Germany, and Switzerland, and is a founding member of the Amsterdam-based ensemble The Continuo Company.