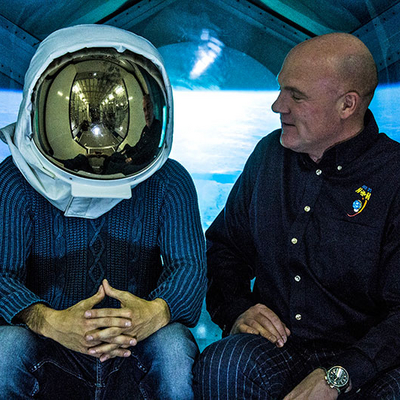 Birth and Death of a Star

For my project I composed music inspired by the life cycle of a star. I wanted the music to be representative of our connection to the stars. How the elements inside our bodies were in fact created out of exploding stars, freeing elements like carbon, calcium and iron, which later became part of our muscles, bones and blood. Birth and Death of a Star is an educational and musical project hoping to spark the curiosity of the general public at schools and universities about space and the place of humanity in it.

I want to reach as many people as possible with my music. Therefore I contacted André Kuipers. Together we made a video in which Kuipers speaks about the evolution of the stars and their connection with human beings. I thought the best person to share this message would be someone who had actually been in space. Someone who had witnessed this level of connectivity from a privileged spot: a place like the International Space Station. And so, André Kuipers, a man who has left earth twice and has lived 204 days in space, became the perfect person to reach out to. The video is projected during the performance.

For Birth and Death of a Star I also collaborated with Laura Polence, singer and graduate of the CvA, CvA master students Pol Belardi, Lennart Altgenug and bachelor student Jeroen Batterink. I asked the Polish artist Pawel Kuczynski, whose drawings won many prizes, to create the artwork.

After my graduation from the bachelor Jazz at the CvA I want to continue with the master Composing for Film, a collaboration with the Netherlands Film Academy.