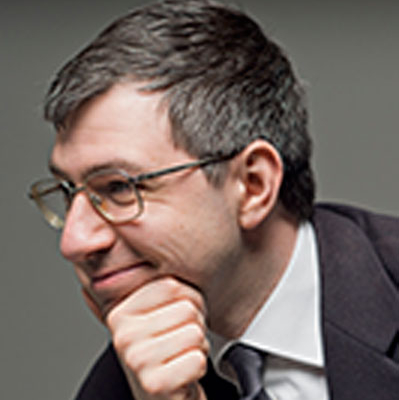 Andrea Friggi was born in 1979 in Milan where he earned his first doctorate in 2003 in philology (Greek paleography) from the Università Cattolica del Sacro Cuore under the guidance of Carlo Maria Mazzucchi. He also earned a PhD in Byzantine philology from the University of Turin in 2007 under the guide of Enrico V. Maltese. He is active as a scholar and has published a number of articles.

He has studied organ, harpsichord, and continuo. Among his teachers are Edoardo Bellotti and Stefano Demicheli. He also attended masterclasses with René Clemencic and Luigi F. Tagliavini. In 2007 he moved to The Netherlands to study with Menno van Delft at the Conservatorium van Amsterdam where he graduated in 2011. Following his BA graduation he continued his studies in Amsterdam with Bob van Asperen and Richard Egarr and obtained a Master degree in Basso Continuo Specialization in 2013 with Thérèse de Goede.

He has performed as a soloist, conductor, and continuo player at some of Europe's major venues (among which the Concertgebouw and the Muziekgebouw aan ’t IJ in Amsterdam, the Erbdrostenhof in Münster, Utrecht Early Music Festival, Musica Antiqua Brugge Fringe, Summerwinds Festival Münster, Kunsthalle Lingen, Chapelle des Minimes Bruxelles, Grachtenfestival Amsterdam, van Wassenaer Festival Amsterdam, Reinkenfestival Deventer) with several ensembles, among which Dolce & Tempesta, Stile Galante, the Sweelinck Baroque Orchestra, I Piccoli Olandesi. He has recorded for Bongiovanni, Fuga Libera, and Pan Classics.

In 2009 he founded his own group, Ensemble Odyssee, together with recorder player Anna Stegmann with whom he regularly performs. With his ensemble he was awarded third prize in the prestigious Van Wassenar competition in 2011.

Since October 2010 he has been teaching a class on musical philology and musicological resources at the Conservatorium van Amsterdam.

In 2011 he was awarded the prestigious Huygens scholarship from the Dutch government.

The Serenatas and Cantatas with Strings of Antonio Farina, 2 vols + CD

This project includes a two-volumes publication (master thesis) and a recording published by German label Pan Classics, presenting the first modern edition and recording of the music of completely forgotten 17th-century composer. The work, recently reviewed by the BBC, is of great importance in the discovery of previously unknown 17th-century repertoire. A series of concerts in the next year will offer this repertoire to the European public.