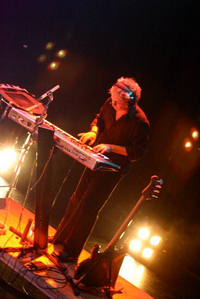 Keyboardist and guitarist Robin van Vliet (Zeist, 1961) studied to become a Pop music teacher at Rotterdam Conservatoire. He is a member of the formation Slagerij van Kampen, with which he won an Edison. He also plays in the formation The Secret Combination and toured with Anouk. As a studio musician, he collaborated on albums by The Yearlings and Racoon, with which he also won an Edison.