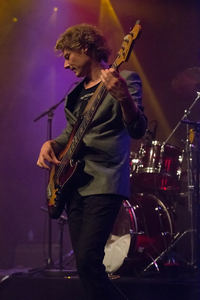 Manuel Hugas (The Hague, 1968) is a self-taught bass player. He developed his style by listening extensively to jazz and jazzrock and studying Miles Davis’s music. In 1988 he joined the fusionband Free Kick, with wich he performed at the North Sea Jazz Festival. He also played in the bands of Jan Akkerman and Candy Dulfer, and in the bands Daughters Of Soul, De Grote Muf, Free Kick, Jazzmeteors, Kane, Liquid Spirits, Loïs Lane, Otis Redding Revue, Ro & Paradise Funk and Vitobrothers. He has recorded numerous CDs and has toured at home and abroad. Together with Wiboud Burkens he produced Take 6, a CD in a series featuring acts that combine pop music and jazz.