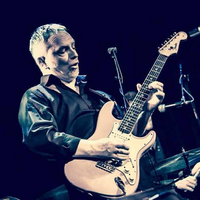 Jack Pisters has an excellent track record as a guitarist, teacher, and consultant in the Dutch music industry. In addition, he is the designer and head of the program of the pop department and the Amsterdam Electronic Music Academy of the Conservatorium van Amsterdam.

He was also responsible for launching the conservatoire's business curriculum in the Nineties and was heavily involved in the set-up of the Beroep Kunstenaar Site. Besides setting up the pop department of the Koorenhuis and the Dutch School of Popular music, he developed the AMACK Pupil Tracking System. He is also chairman of the Sena European Guitar Awards and artistic director of Amsterdam Guitar Heaven and The Guitarmatrix festivals.

As a guitarist and songwriter, he made albums with Avalon, Soylent Green, and SCAR. He also played as a guitarist in many feature films and with Anouk, Leonie Meier, and Keith Caputo, among others. An expert on sound and playing, he has been involved in the production of national and international bands & projects.