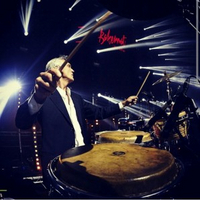 Claus Tofft took his first lessons with the African percussionist Biboul Daurouche in Denmark. He moved to the Netherlands in 1987, where he studied at the conservatories of Hilversum and Rotterdam. In 1994 he received a grant to study in New York and Cuba. Since 1991 Claus has played with several national and international artists such as New Cool Collective, Zuco 103, the Metropole Orkest, Ruth Jacott, Alain Clark, and Waylon.

Claus has taught at, among other institutes, the Rotterdams Conservatorium and the Djam School of Music, and regularly gives workshops at the conservatories of Alkmaar and The Hague, and at Stichting Buitenkunst. He has been a teacher at the Conservatorium van Amsterdam Pop Department since 2010.