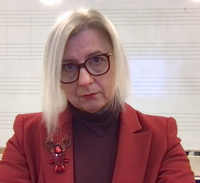 Blanka Pesja (1963, Czech Republic), is a poet, conceptual artist, art teacher and activist. She received her bachelor's degree in liberal arts from the ARTEZ art academy in 1992. Her oeuvre includes texts, paintings, performances and video installations. She has exhibited her own work at home and abroad, organises art projects and collaborates with singer/songwriters and bands as a lyricist.

Blanka has been involved in the development of the study programme for the pop department of the Conservatorium van Amsterdam. In 2009, she initiated the project DarkEnsemble, a free collaboration project for musicians who want to explore the relationship between language and music and want to experiment with electric and acoustic sound. As a producer, she has released three albums with DarkEnsemble and two albums with her Lyric Lab students.

In 2016, Blanka obtained a Master of Art Education from HKU, focusing on 'The New Literacy', which she now applies in her subject Art: language and image. She also developed the Trimodus Method to Lyric Writing, which is used in the CvA Online course.

As an activist, she founded a support group for women in the music industry and works behind the scenes with the Dutch branch of Music Declares Emergency. For the master's programme, Blanka organises the module Managing Your Talents and guides master's students in the content development of their thesis.