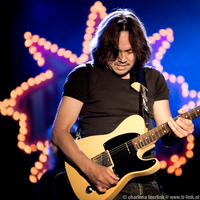 Arnold van Dongen started his career as a guitarist with the band Loïs Lane, while still studying at the Royal Conservatoire of The Hague. After that, he became a much sought-after session musician, working with great Dutch artists and bands including Ilse DeLange, Total Touch and Mathilde Santing. He also collaborates on a number of other projects, such as the programme Made in Holland, involving forty vocalists and instrumentalists from abroad who live in the Netherlands, and concerts with Trijntje Oosterhuis, René Froger and Julya Lo’ko. He can be heard on CD recordings by Edsilia Rombley, Danny Vera and Glennis Grace. In 2011 he joined the band of the TV programme Comedy Live.