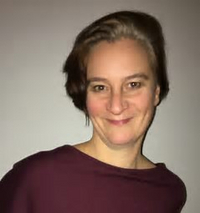 After obtaining a degree in Medieval studies/Arabic, Renée Harp studied voice and opera at the Sweelinck Conservatorium Amsterdam. After finishing her opera studies she received a grant to continue her studies at the Guildhall School of Music and Drama in London.

Renée performed in many small and large productions in the Netherlands, but she found she preferred doing her own small-scale productions, for which she wrote the lyrics herself. Over the years she was regularly invited to do musical projects with children. She taught for five years at a musical school for children and led musical projects at several schools. She also cooperated with the educational programmes of the Dutch Opera, the Concertgebouw, and other cultural institutes.

She has been a teacher at the Conservatorium van Amsterdam since 2004. She has taught methodology to classical voice students and currently gives singing lessons to students in the Music in Education programme.