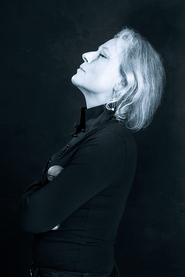 Sylvi Lane studied at the Conservatorium van Amsterdam. Inspired by artists such as Aretha Franklin, Chaka Kahn, Gladys Knight, Betty Carter en Sarah Vaughan she developed not only her vocal qualities, but started to write music as well. With her first band she sang all great soul classics. Next, she sang jazz, soul and pop music in groups ranging from duo to big band, in clubs, theatres and at festivals, at home and abroad. Ze worked with well-known producers in the studio and sang leaders for tv programmes. With Michiel Borstlap, Anton Drukker and Joost Lijbaart she formed a band and recorded the CD In the palm of my hand, an album with original compositions; adventurous, energetic and intellectual ‘contemporary jazz’. With this band she toured the jazz clubs and played at the North Sea Jazz Festival. She also wrote many crossover soul, jazz and pop music. In 2010 she released a CD with her new band The SOULSILLY Xperience, with Rembrandt Frerichs, Phaedra Kwant and Haye Jellema.

She is a teacher at the Conservatorium van Amsterdam. Additionally, she has given masterclasses and workshops in the Netherlands, Belgium, Liechtenstein and Norway.