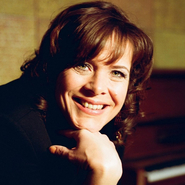 Sanna van Vliet studied with Judy Niemack, Rachel Gould, Jeanne Lee and Frans Elsen at the Royal Conservatoire in The Hague. After that she completed the three-year study Complete Vocal Technique in Copenhagen.

Her first CD, In Sight, was released in 2004. Her next CD, A Time For Love, Remembering Shirley Horn, was voted by readers of Jazzism Magazine to be one of the best jazz CDs of 2007. Het latetst CD, Dance on the Moon, was released in 2010 to critical acclaim.

In addition to performing, she is active as a teacher at the Royal Conservatoire in The Hague and at the Conservatorium van Amsterdam. She has been a guest-teacher at conservatories in Rotterdam, Enschede, Groningen and Maastricht and has given workshops in Spain and South-Korea.