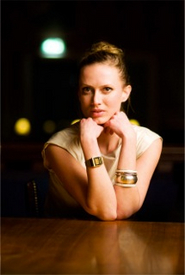 Roos Jonker graduated in 2005 from the Conservatorium van Amsterdam master's degree programme. She signed a contract with DOX Records and recently released her debut album Mmmmm, on which Rory Ronde and Benjamin Herman, among others, may also be heard. As a singer, songwriter and producer, she records in her own living room and makes sure that everything she does bears her own style. She ranks high on Japanese hit lists, and her album has also been released in Thailand and Taiwan.