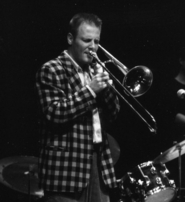 Martijn Sohier (Apeldoorn, 1965) graduated from the Hilversum Conservatory in 1989. During his studies he played lead trombone with The Glenn Miller Orchestra, with which he toured Europe for three years.

Martijn played with orchestras such as The Skymasters, the Bob Brookmeyer Big Band, the Metropole Orchestra and Peter Herbolzheimer’s Big Band, and artists such as Toots Tielemans, Michael Brecker, Clark Terry, The Yellow Jackets, Slide Hampton, Johnny Griffin, George Coleman and Shirley Bassey. Currently he is lead trombonist with the Jazzorchestra of the Concertgebouw conducted by Henk Meutgeert and The Dutch Jazz Orchestra conducted John Ruocco. Additionally, he leads two groups, The Phonebone Quintet, a jazz quintete with saxophonist Allard Buwalda, and The Stanton Band, a fusion group for which he composes and arranges the repertoire.

Martijn teaches at the conservatories of Amsterdam, The Hague and Utrecht.