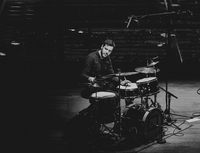 Mark Schilders is a drummer, composer and multi-instrumentalist producer based in Rotterdam, The Netherlands. A born natural, Mark began drumming at 5 years old and went on to seamlessly integrate into the established Dutch jazz scene at the young age of 18. He graduated cum laude from the Codarts Conservatory of Rotterdamcum in 2011. While a student, he won the prestigious Prinses Christina Jazz Concours (2008) and the Erasmus Jazz Prijs (2011). In 2012 he was awarded three grants simultaneously to study at The New School for Jazz and Contemporary Music in New York where he studied under the guidance of Amir Ziv, Jim Black, Reggie Workman and Ben Street.

In 2014 Schilders was selected as ‘Nieuwe Maker’ by the Dutch Performing Arts Fund in collaboration with Stichting Jazz International Rotterdam which marked the start of his career as a composer and producer of original music. In the years following, his first album Fabrik (2016) saw the light of day, followed by commissioned works for a.o. the New Rotterdam Jazz Orchestra (2017) and the infamous contemporary dance company Conny Janssen Danst (‘KIEM’ 2019/2020). Since 2020, he has released new music under his pseudonym Fabrik.

Mark is currently active as a drummer with among others Maarten Hogenhuis, Jeroen van Vliet and The New Rotterdam Jazz Orchestra. He can also be found touring internationally on bass and synthesizers with one of the most sought after Dutch electronic music acts, Weval. Besides touring and teaching Mark is running his own production and mixing studio in Rotterdam.