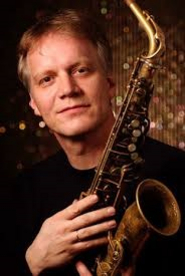 Marc Scholten studied classical and jazz saxophone at the Utrecht Conservatory, where he studied with Ed Bogaard, Andre Hemmers and Iwan Roth, and jazz with Piet Noordijk and Albert Beltman. During his studies he already played in groups and orchestras such as the Skymasters, the Dutch Jazz Orchestra, the Metropole Orchestra, the Ebony Band, The Noord Hollands Philharmonic and the Timeless Orchestra.

In 1991 he joined the Metropole Orchestra as lead alto saxophonist. As a member of the Metropole Orchestra he played with artists such as Herbie Hancock, Pat Metheny, the Brecker Brothers, Bob Mintzer, Mike Stern, Kenny Barron, Kenny Werner, Elvis Costello, Gino Vannelli, Ray Brown, Bob Malach, the Yellow Jackets, Bob Brookmeyer and Joe Cocker. In 2001 Marc was invited by the NPS to play lead alto in the EBU Jazz Orchestra in Istanbul, where several nationalities were represented.

Marc is also active in smaller groups. He was one of the founders of the Koh-I-Noor Saxophone Quartet (1985) en Oostenwind (1992) and in 2005 he started his own group, The Blindfold Test, with which he performs his own compositions. In 2006 his composition Before the jump received an honorable mention at the International Songwriting Competition 2006.

Additionally, he is a much sought after studio musician, doubling on all saxes, (bass)clarinet and flute. He can be heard on the RTL4 tv leaders, RTL 8, Cultura Net, Tweekamp, Viertakt, The Bachelor and Pulse.
Since 1993 Marc has been teaching at the Utrecht Conservatory. In 2014 he was appointed teacher of technique and clarinet as a subsidiary subject at the Conservatorium van Amsterdam.