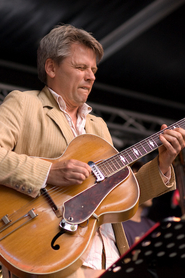 Maarten van der Grinten is known as a outstanding and versatile guitar player, but also as a gifted composer and arranger. He is teacher and chairman of the guitar section of the Jazz Faculty at the Conservatorium van Amsterdam.

Maarten van der Grinten played and recorded with many Dutch jazz musicians including Wim Overgaauw, Ack van Rooyen, Benjamin Herman, John Engels and Jesse van Ruller and visiting players such as Clark Terry and Toots Thielemans along with a number of large ensembles including the WDR-Bigband, The Metropole Orchestra, the Willem Breuker Kollektief and the Jazz Orchestra of the Concertgebouw.

Maarten van der Grinten has performed at venues throughout the world. He has played and continues playing with the top of the Dutch and international acclaimed jazz vocalists including Greetje Kauffeld, Laura Fygi, Mathilde Santing, Francien van Tuinen, Fay Claassen, Rima Khcheich and Cristina Branco. Compositions of his are being played regularly by the Jazz Orchestra of the Concertgebouw. He composed also for the Mondriaan String Quartet with DIG d'DIZ and in 2010 he arranged for the Metropole Orchestra with Chaka Khan as soloist.