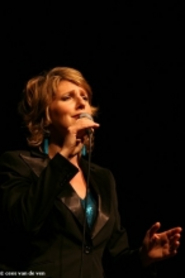 Lydia van Dam studied at the Hilversum Conservatorium with Jerry van Rooyen, Marjorie Barnes, Greetje Kauffeld, Deborah Brown and Gé Titulaer. Even as a student she already performed with renowned orchestras, such as the  WDR Big Band conducted by Jerry van Rooyen, the Skymasters and the Metropole Orchestra. With the Glenn Miller Revival Orchestra she toured Europe and Japan for two years.

In 1995 she released her debut album, Evidence. In the same year, the Hilversum Conservatory was invited, as the only music institute in Europe, to contribute to a compilation CD Taking Notes - Showcasing the Worlds Top Jazz Students, of the International Association of Jazz Educators. The song Starjive by the Lydia van Dam Group was chosen to be included on this CD.

Additionally, Lydia performed regularly with the G.U.B. Trio in Germany and collaborated on a number of projects there. In 2008 she toured the Dutch theatres with Gerard van Maasakkers and Jeroen Zijlstra in the show Troost and in the 2009-2010 season she gave a series of jazz concerts with Bert Lochs and his band.
Lydia is a voice teacher at the conservatories of Amsterdam and Utrecht.