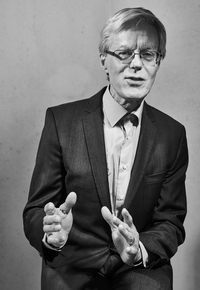 Jurre Haanstra studied composition at the Rotterdam Conservatory with Theo Loevendie and orchestral conducting with Jan Stulen and André Presser. He has composed many scores for film and television, including successful Dutch TV series such as De brug (The Bridge), Wij Alexander (We Alexander) and Het verdriet van België (The Sorrow Of Belgium), Claude Goretta's film of the trilogy by Hugo Claus, and Baantjer, featuring Toots Thielemans as guest soloist. He also wrote music for the films Een pak slaag, featuring Stan Getz as guest soloist, the thriller Claim, starring Billy Zane and Louise Lombard, and Crusade in Jeans, starring Emily Watson, Stephanie Leonidas and Johnny Flynn. Additionally, he wrote the music for the last ten films made by his father, Oscar winner Bert Haanstra, and he composed and arranged the CD Forest Eyes, featuring soloist Stan Getz.

In his capacity as an arranger and conductor he has collaborated on productions and concerts with artists such as Oleta Adams, Jamie Cullum, Georgie Fame, Michael Franks, Benny Golson, Johnny Griffin, Roy Hargrove, Elton John, Ivan Lins, Michel Petrucciani, Clark Terry and Toots Thielemans. He conducted and recorded with the Metropole Orchestra, the Radio Symphony Orchestra, the Jazz Orchestra of the Concertgebouw, the Residentie Orkest, the City of Prague Philharmonic and the Bulgarian Symphony Orchestra.

Jurre Haanstra was awarded an Edison in 1981, the Dutch Musical Award in 1989 and the Golden Harp in 1995. Since 2008 has been artistic leader of the master’s programme in Composing for Film, a joint programme offered by the Conservatorium van Amsterdam and the Netherlands Film Academy.