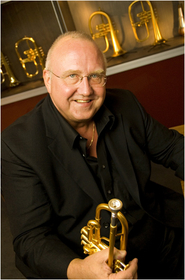 Jan Oosthof (1952) studied Classical trumpet. Simultaneously, he worked with several big bands. After completing his classical studies in 1978, Jan's next big gig came with The Skymasters, a radio orchestra that did weekly broadcasts with such jazz greats as Freddie Hubbard and Dizzy Gillespie. This led to a job as the lead player on the internationally famous band, Peter Herbolzheimer's Rhythm Combination & Brass. That gig gave him the opportunity to meet and work with Derek Watkins, Chuck Findley, Gary Grant, Bobby Shew, Andy Haderer and Ack van Rooyen. 1978 also marked his first performance with the Metropole Orchestra, which led to his fulltime employment as their lead trumpet player in 1986.

Jan has been in high demand as one of Europe's most prolific session players with over three hundred CDs to his credit. He is also a member of the Dutch Jazz Orchestra and lists the bands of Paul Kuhn, Köln-Musik Big Band under the leadership of Jerry van Rooyen, WDR-Big Band and James Last.
Jan Oosthof has been a teacher at the Conservatorium van Amsterdam since 1992