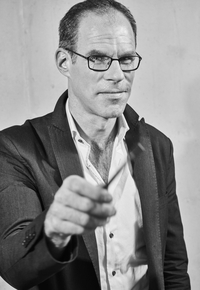 Furthermore, Ilja is a composer and arranger. He has written for such diverse orchestras as the WDR Big Band, the HR Big Band, both orchestras of the Royal Dutch Navy and Airforce, the Metropole Orchestra and the Cubop City Big Band. Soloists like Branford Marsalis, All Jarreau, Randy Brecker, Toots Thielemans, Jörgen van Rijen, Branimir Slokar and Ben van Dijk played his music in recent years. Some of his compositions and arrangements have been published by Warwick Music, England.

Ilja Reingoud is a teacher of trombone as a principal subject at the Conservatorium van Amsterdam, and as of September 2019 he will conduct the CvA Big Band. Additionally, he gives clinics the world over (Los Angeles, Shanghai, Stockholm, New Orleans, Barcelona, Cyprus, Tokyo, Osaka).