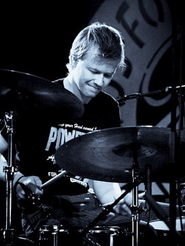 Haye Jellema studied jazz drums with Martijn Vink, Marcel Serierse, Lucas van Merwijk and Gerhard Jeltes at the Conservatorium van Amsterdam. His interest in world music was also developed there, and he took courses in Latin and Brazilian percussion with Bart Fermie, African percussion with Aly N’Diaye Rose and Ponda O’Brian, and tabla with Niti Ranjan Biswas. In 2005 he graduated from the master’s degree programme and started teaching at the CvA.

As a drummer Haye has been playing with lots of great musicians in very different styles. He is known as a bigband and smallgroup player, but he does a lot of studio and pop work as well. He works with groups and artists such as Mathilde Santing, Traeben, AbSurdo, Jazz Orchestra of the Concertgebouw and the NDR-bigband (Hamburg, Germany) and several other various big bands.