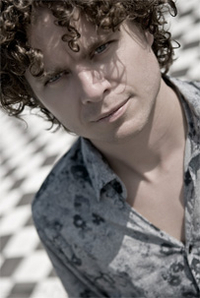 According to the North Sea Jazz Festival Harmen Fraanje can be counted among the most prominent jazz pianists of the Netherlands. In just under ten years’ time, he has built an impressive musical career, the end of which is nowhere in sight. Fraanje’s music has many layers. His musical muses are many, as are the numerous collaborative efforts he has undertaken. He is able to surprise with a true musical kaleidoscope of jazz, world and classical music.

Not surprising that his name is connected with a number of trend-setting groups, such as that of Eric Vloeimans or American saxophonist Michael Moore. Fraanje’s most recent project consists of his Avalonia Trio, with which he released the album Avalonia. The internationally acclaimed website AllAboutJazz selected a performance by this trio as one of the best concerts of 2010. In the same breath as grandmasters like John Scofield, Brad Mehldau and Bill Frisell, no less.

Besides that Harmen is performing a lot with the trio Reijseger Fraanje Sylla, 'creating an authentic sound and a unique character; a humorous, generous world where an outpouring of improvisational brilliance is guided by a fearsomely dedicated technique.'