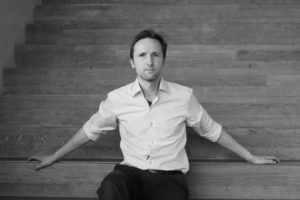 Clemens van der Feen (1980) studied jazz and classical bass at the Conservatorium van Amsterdam and the conservatory of Detmold (Germany), obtaining his master’s diploma in both fields with honours. After playing with orchestras like the Amsterdam Concertgebouw Orchestra and the Orchestra of the Eighteenth Century, his main focus became jazz and improvised music. He lived in New York for a while to take lessons with Ben Street, among others. Returning to the Netherlands, he grew out to be one of the most sought-after bass players around.

Clemens has worked with many great international musicians such as the late Toots Thielemans, Tony Malaby, Chris Potter, Nelson Veras, Becca Stevens and Billy Hart. He has been playing all over the world, from jazz clubs in Paris and Tokyo to the Musikverein in Vienna and Carnegie Hall in New York. He also composes and produces his own music.

Clemens plays on a double bass from the collection of the Nationaal Muziekinstrumentenfonds (NMF).