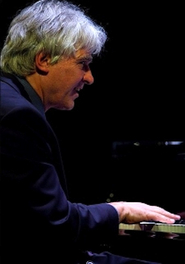 Berend van den Berg studied piano at the Royal Conservatoire in The Hague. He started his career in the Jeff Reynolds Quintet and the Frank Grasso Big Band, playing with John Clayton, Dee Daniels, Chet Baker and Toots Tielemans. He accompanied Ann Burton, Denise Jannah, Astrid Seriese, Ellen Helmus, Joop Thonhauser and Lils Mackintosh. As pianist of the Hans Braber Trio he played with Phil Upchurch, Jon Eardley, Melbra Rai and Heinz Kretchmer. At the North Sea Jazz Festival he performed with artists including Earl Coleman, Idris Mohammed, Walter Booker, and with his own band N.J.Q.

He wrote songs for a children’s theatre production and played in the music theatre production You’re the top, about the life of Cole Porter, with artists such as Willem Nijholt and Gerrie van der Klei. He played in the Hein de Jong Quartet with guests such as Ferdinand Povel and John Engels. With the Hans Mantel Trio he toured India twice and in 2003 he toured Indonesia with the Soesja Citroen Quartet. He also collaborated with Mathilde Santing in her theatre productions and played in her band The Tender Trap. Additionally, he played with his own trio and his band The Octet. He is accompanist to vocalists Mirjam van Dam, Simone Honijk and Anne Chris, with whom he toured India.

He is accompanist in jam sessions with René van Beeck, and has been playing at the Jellyfish Festival on Schiermonnikoog since 2013. Additionally, he teaches at the Conservatorium van Amsterdam.