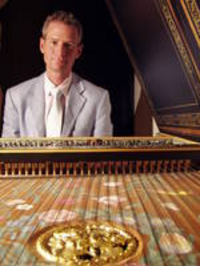 Tilman Gey (Munich, 1970) started his studies at the conservatory of Frankfurt, Germany. In 1991 he was invited by Bob van Asperen to study harpsichord with him at the Conservatorium van Amsterdam where he graduated in 1997 as a harpsichord teacher and soloist. Tilman Gey followed masterclasses with Gustav Leonhardt, Ton Koopman, Jos van Immerseel en Lars‐Ulrik Mortensen. Since 1999 he is one of the harpsichord teachers at the Conservatorium van Amsterdam.

Tilman Gey is member of several Early Music ensembles, for example the Braahe Ensemble. He played as a soloist or a continuo‐player in several baroque orchestras, such as Combattimento Consort Amsterdam and the Netherlands Bach Society.
In 2008 he was asked to play in a production of the German television, the ZDF. He was on tour in for example Finland, Poland en Germany. He specialized on historic church organ playing and since 2012 on forte piano playing, too.