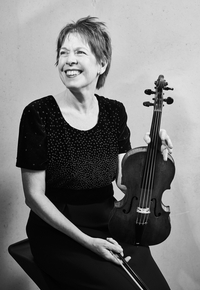 Mimi Mitchell studied musicology and violin in the United States. She then came to the Netherlands to study baroque violin with Jaap Schröder at the Conservatorium van Amsterdam. She is co-founder The Locke Consort, winning prizes with this ensemble at competitions in the United Kingdom, the Netherlands and the United States. She also plays with several prominent early music ensembles, such as In Stil Moderno and the The Amsterdam Baroque Orchestra (conducted by Ton Koopman) in the Netherlands, Anima Eterna (conducted by Jos van Immerseel) and Currende (conducted by Erik Van Nevel) in Belgium. She performed with London Baroque as a guest musician and played the Renaissance violin with The Parley of Instruments in England. As a researcher, she brings many forgotten compositions to light.
Additionally, she is a much sought-after speaker and teacher, giving lectures and masterclasses in the Netherlands, England, Germany, Croatia and the United States.